What Does It Mean To Forgive A Neighbor? 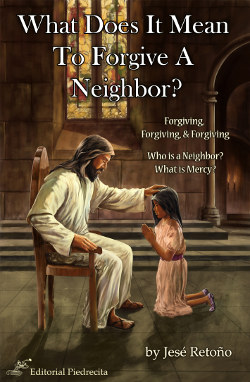 Who is a Neighbor?

What value is there in this book?
What message or aim does this book have?

This book has been made with the sole purpose of getting to the bottom of what forgiveness and reconciliation truly are. Jesé Retoño has written it with the aim of clarifying what remorse or contrition is.

These terms have yet to be understood or comprehended. They seem to be just words used on a regular basis, terms having an association to judicial courts where punishments are sentenced and judges are gods. Human degeneracy and deterioration have reached extremes now, to the point of not recognizing or understanding the true meaning of these terms, which have their origins in God’s creation and His people.

Upper class society or the elite bureaucracy, psychiatry, politics, the sciences, etc., have changed their meanings. And the world at large doesn’t even recognize any of the moral significance behind these terms. We’ve gotten to the point of foolishly and blindly forgiving others. We neither know or understand the signs of true remorse, and we forgive whomever without any basis whatsoever. Suffice it that we are told, “I’m sorry!”… Read more 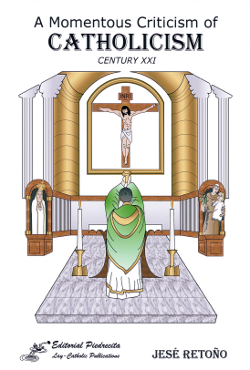 What’s happening in the Church?

Is it corruption perhaps?

Why don’t priests get married?

Why read this book? I want a good reason for reading this book.

The reasons for which I became inclined to write this book are that: In seeing a drought of doctrinal teachings in the Catholic Church, an extremely exaggerated increase of ignorance from Catholics throughout the world, in seeing the enormous errors happening on a daily basis, but above all, the mass exodus of Catholics to other religious denominations, I went ahead and began writing so that the reality of what’s happening in Catholicism can be understood.

Throughout the world, us Catholics think we know the doctrine of the Church merely because we go to Mass on Sundays, but the majority don’t even know that the Bible exists. This deficiency and ignorance in religion causes for the leaders in Catholicism to give little importance on the harm they are about to inflict on many innocent every time they defend their status and vanities, causing Catholics to desert the Church.

In Catholicism, our priests have also set aside religious instruction, and they have devoted themselves more so to creating fame and to relishing pagan or social pleasures further. Abuse from the clergy toward the laity has incremented, and laymen—so fragile and ignorant in their doctrine—fall to the clutches of wolves covered in sheep’s clothing.

Now, having understood my motives for having written this book, dear reader, I wish to offer you a brief summary of the obtained benefits in reading this book… Read more

Conjectures & Visions of the Future

God Has Not Finished Creating Mankind

The Bible and Its Correct Interpretation

The purpose of this book is to show the right way of interpreting Scripture according to the Canon of the Holy Roman Catholic and Apostolic Church.
Full of wisdom from the Most High, knowledgeable in apologetics, the history of the Church, and the Bible, we answer the following questions for all men, women, and youth throughout the world:

What’s the overall secret that God has given us so that we may be able to understand, without error, His message and His doctrine in the Bible?

What’s the master secret required for being able to interpret Scripture and the Apocalypse, according to Christ’s plan? Or better said: What’s the master key or one-and-only secret given exclusively to his true Church for knowing what Scripture encloses?

All those who possess this secret have the power to know Christ and God his Father, in person.

We give authentic examples in accordance to Church doctrine so that one can understand, in general, how to interpret the Bible and not make mistakes. This book encloses secrets that all men and women who look for God must know in order to find Christ and discover the real message upon reading Scripture.